Two years ago I interviewed Sherman Alexie for the second time. The interview was going to be a centerpiece of a theme issue for a magazine that I had written for a number of times before. The editors decided to scrap said theme and the interview hung in limbo for nine months before the managing editor killed it.

I've interviewed dozens of individuals from Wanda Sykes to Ron Jeremy and Alexie remains among my favorites, both because his art impacts my life and because he is boundlessly intelligent. He sends my mom the sweetest thank you notes when she sends him baklava, plus, he is the only person who's ever had the balls to write her and say, "Could you please send more?"

Alexie's new book, the autobiographical young adult novel, The Absolutely True Diary of a Part-time Indian, was just nominated for a National Book Award. What follows is the introduction to and an excerpt from the interview that never ran. It went up this morning on the literary site I write for, The Nervous Breakdown:

Pop culture mysteries from the past 24 hours:

1) Why does each vocalist--male or female--featured on the soundtrack to any given episode of Grey's Anatomy sound like Dave Matthews with an estrogen patch?

2) How many of Satan's loads did Dane Cook have to swallow before he got booked into Seattle's massive Key Arena for his upcoming show?

3) Aaron Sorkin is one of the most astute writers in any medium, so why did no one associated with the marketing of his new play, The Farnsworth Invention, kill the um-yeah-no-shit tag line featured in its ads, "The turning point of the 20th century wasn't on television. It was television."?

4) Might we all agree that Carrie Fisher's guest star appearance last night on Tina Fey's wickedly brilliant 30 Rock indicates the possibility of a wise and loving God or universe? (This isn't a "mystery" so much as a question underscoring the potential commonality of all sentient beings.)
Posted by Litsa Dremousis: at 11:16 AM 2 comments:

"If goodness is assured an ultimate victory over evil, we are in a comedy, and I must say it is an ugly farce... ...considering how we suffer in the course of the contest."

Norman Mailer is interviewed by Michael Lennon in New York Magazine regarding their new book, On God:

Insightful comments my father made recently that touch, in part, on smoking

1) "Being a writer is like being a smoker. Deep down, you either are or you're not. And either way, you know it."

2) "I like that people in this neighborhood [Capitol Hill, where I recently moved] are unapologetic about smoking. You don't see them crouched and sheepish about it."

[Note: Dad quit smoking in 1974. Safe bet, however, that his version of an afterlife includes Kents.]
Posted by Litsa Dremousis: at 10:06 PM 2 comments:

I wonder who the dead woman was and why no one claimed her: 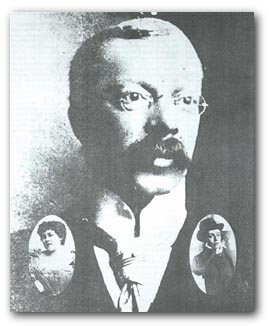 From Reuters via Yahoo!:

LONDON (Reuters) - It was sensational stuff that riveted a nation: A mild-mannered American doctor poisons then dismembers his unfaithful wife, flees England in disguise with his mistress -- and is caught, tried and hanged.

The problem is that the poisoned corpse that sent Dr Hawley Crippen to the gallows in London in 1910 was not that of his wife, according to new evidence found by U.S. researchers.

A team led by John Trestrail, head of the regional poison centre in Grand Rapids, Michigan, took mitochondrial DNA -- genetic material passed on through the mother -- from a tissue sample from the corpse kept in a London museum.

They then compared it with samples from three of Cora Crippen's female descendants, found after a 7-year search.

"That body was not Cora Crippen's," said David Foran, a forensic biologist at Michigan State University. "We don't know who that body was or how it got there."

"Do you mind changing it? I don't think the Seattle Channel is jizz-friendly"--a producer with A Guide to Visitors

The producers of the Seattle-based story-telling salon, A Guide to Visitors, are among the smartest and funniest individuals I've worked with in the arts. So when they asked me to resurrect a story I'd told onstage last year at the Rendezvous, only this time for the Seattle Channel, I said, "Yea!" even though I was still living out of boxes and had scant few clean shirts.

The show has aired a few times (Channel 21, if you're local) and it's archived online now:

Or if you are jizz-friendly, you can read the original version I wrote for the Black Table three years ago:

I had coffee with a new friend this morning and as we were leaving Top Pot, I noticed she was carrying a Believer tote.

"I've written for The Believer," I said.

She replied, "Yeah, I subscribed awhile ago and they sent this bag, but not the actual magazine. I hear they're like that."
Posted by Litsa Dremousis: at 8:39 PM 1 comment:

"The inside-the-Beltway problem is a type of tunnel vision and a sense of narrow possibilities. It's also a fear of ..."

"...not being Serious with a capital S...In other words, it's much harder to damage your career by consistently supporting war and cruelty than by consistently supporting peace and love. The default position is 'bombs away.' The problem with the outside-the-Beltway mentality is an ignorance of what the actual human pressures and incentives are inside the Beltway, why politicians and pundits behave the way they do, and why that is not necessarily entirely attributable to their moral depravity."

Radar has a new interview with one of my very favorite writers, the ceaselessly compelling Hendrik Hertzberg:

And to everyone who has a ball sack:

This appears self-evident, but in case it's not:

Your testes and/or penis will not become disabled if you apologize without someone first drawing you a schematic illustrating why, perchance, an apology might be in order.

[The vaginal cabal does fucked up stuff, too. So not the point right now.]
Posted by Litsa Dremousis: at 11:29 PM No comments: