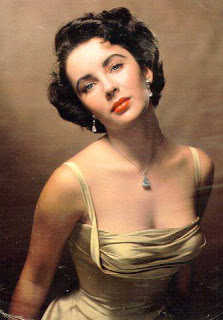 In college, the above photo was among those I tacked on the bulletin board near my bed. A film buff, I was enamored of Giant, Cat on a Hot Tin Roof, Father of the Bride, Little Women and Who's Afraid of Virginia Woolf. I was captivated by Elizabeth Taylor's talent and found her personal life eminently readable. No one who seemed both etched in marble and gloriously flesh and blood at sixteen, when this photo was taken, was going to lead an uncomplicated life. "Iconic" is overused, but regarding Elizabeth Taylor, no other word is apt.

Like all of us, she had her flaws. The excess of the Cleopatra era was ridiculous. Set aside the Krupp diamond, which I would have readily accepted, too. Nobody needs Chasen's chili flown halfway around the world just to have one's preferred nosh on set. And sometimes, these adolescent whims overshadowed what allowed Taylor such privilege in the first place: her extraordinary artistic gifts.

That Taylor was one of our preeminent beauties is beside the point. Her body of work, coupled with her bold and pioneering AIDS fundraising, will remain a fine legacy. I remember being moved by her love for Rock Hudson and how she resolutely stood by him when he announced he had AIDS. At this point, few public figures had spoken out in support of those with AIDS. Half the country still thought it was casually communicable and, of course, homophobia was rampant. Taylor's voice and her tireless fundraising helped change the national discussion and millions benefited as a result.

In recent years, like many near the end of life, Taylor had become somewhat of a caricature of herself and, clearly, the pills took their toll. But for decades, her work and bearing were majestic.

Sleep well, Ms. Taylor. There will never be another like you.
Posted by Litsa Dremousis: at 10:03 AM