Surpassing, even, mint and chocolate or eggs and Sunday mornings

As noted before, I'm not a big fan of YouTube, largely because I have things I still want to accomplish before I'm dead and it's not as if there's an infinite amount of time in which to do them.

But I'm psyched for the upcoming DCfC disc, so I thought I'd peruse some of the lads' concert footage to tide me over. Then I stumbled upon this video for "I Will Follow You Into the Dark", which is lovely and appropriate for all sorts of reasons:

Posted by Litsa Dremousis: at 8:22 PM No comments:

Goddamnit, people, I'm in no mood for this shit: Cooper House to become office space

I'm thrilled that it's not going to be demolished, but it's about a mile from here and it kills me that in a city teeming with the newly rich, no one had the wherewithal to restore and augment its glory. If I had the money, I know exactly what I'd do with it. And, yes, the bunnies would have their own wing.

For the past week, I've wanted to address Geraldine Ferraro's ludicrous screed and the more batshit elements of Pastor Wright's beliefs. I respect each of them in some ways and in others think they're gargling bongwater. And there's much I want to say about the complex, challenging, and moving speech Senator Obama gave this morning.

But I discovered last Friday that Lulu has lung cancer. (Initially, it presented more like arthritis, which would have given her more time.) She's almost ten, which is impressively old for a rabbit, particularly a Holland Lop, and up until a few weeks ago, she was a super-intelligent, sprightly ball of fluff. She and her remaining brothers have had a great run of things and I love them (and Oscar, who died in '03) like I love my family and friends. But she's getting sicker rapidly and this morning, I made the call. Tomorrow at 3:00 p.m. her vet will euthanize her and I'll be in the room soothing her.

So there's much I want to write about the campaign, but I won't right now, because my heart and head are filled with sand.
Posted by Litsa Dremousis: at 7:31 PM 1 comment:

Gentlemen, if we may have a word:

I'm not going to write about Elliot Spitzer except to say I think he should resign. Not because he cheated on his spouse, but because he violated the same laws he once prosecuted as New York Attorney General, indicating his judgment is way out of whack. (Bonus points to The Daily Show for deeming it "Fuck-gate".)

Instead I'm going to address the headline on the bottom left of the current issue of Esquire, "WHEN THE HELL DID 39 YEAR-OLD WOMEN GET TO BE SEXY?". My Esquire editor is awesome as popcorn and I've read Esquire since high school. Also, I understand that, ostensibly, the headline is complimentary and, no, I haven't had a chance to read the piece yet. My beef is strictly with the headline's implicit surprise. So, to the editor(s) who wrote and approved the headline, I say this:

1) If I took my shirt off, I guarantee you'd stay in the room and,

2) Bill Clinton is the ex you tried to stay friends with but who keeps trying to fuck you. Dude, you're not getting back in.

3) I wish Hillary didn't represent New York. It's like your high school principal managing the Beatles.
Posted by Litsa Dremousis: at 1:25 AM 2 comments: 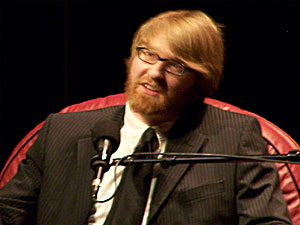 ...either that guy in the corner in orange safety pants holding a protest sign and wearing a top hat is mentally disabled or he is the coolest fucking guy you will ever know."

Chuck Klosterman is wiser than your grandpa and writes better than a fish swims. From the online version of New York Magazine:

A Quantitative Overview of the Only Individuals or Entities More Annoying than the Democratic Voting Populace of Ohio:

A guy who is the spitting image of Rob Halford just looked up at my kitchen window, saw me pouring tea in my sushi pajamas, and smirked.
Posted by Litsa Dremousis: at 10:55 AM 2 comments: