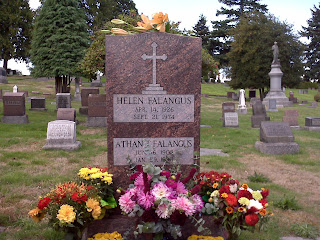 In short stories, everyone's grandmother smells like rosewater or lilies or, if she's the antagonist, bears a faint whiff of venal decay.

I've had allergies since I was a little kid and I don't remember what Yiayia smelled like. I remember her voice, though, warm and encouraging and sometimes conspiratorial in the best sense, as if she and I were our own party of two, off to do something wildly fun and cultured but still ladylike, as she was of that generation.

I have a framed photo of Yiayia and Papou from the 1940s on my mantel and have viewed hundreds of pictures of her in family albums, but I see her most clearly in my mind's eye. We lived near her and Papou from my birth until I was five, when a stroke felled her into a coma, and as such, she and I saw each other or spoke on the phone everyday. Mom insists that when Yiayia (her own mother) called, she would playfully say, "I didn't call to talk to you. I called to talk to Litsa."

I knew she was ill because when we vistited Yiayia and Papou's home, she was usually reclining in the hospital bed they'd intstalled in their living room. But I never remember her acting ill. She'd have me hop on the bed with her (with an assist from one of my parents or Papou, I suppose, though I can't recall) and we'd read countless books together and to each other. (Mom, my aunt, and uncle all describe her as a voracious reader and her few living friends have told me, "Helen always helped us with our book reports.") She was a gifted seamstress (though not by profession) and taught me a number of stiches, always on the most beautiful swaths of silk or taffeta, because muslin simply would not do.

And then she was gone, but not quite. "When Yiayia is out of the hospital, we're going to throw the biggest party in the whole world!" my mother and I would say to each other, though my mother must have known her mother would not awake but kept a brave face for my brother and me regardless. There was never a choice to make, Yiayia was breathing of her own accord, and that, of course, was worse. She was nearly unresponsive, but Mom says that when a nurse would drop a tray or there was a loud noise in the hall, Yiayia's eyes would flicker. And the two times Mom brought my brother and me to see her, Yiayia's eyes filled with tears.

This lasted nearly two years, until her death when she was 48. Throughout my life, I've been a believer, an agnostic, and an atheist, and while I won't limm my beliefs now, I will say there were times I hated God. How could any omniscient deity who purports to love us allow someone so unfailingly kind and magical to suffer so long and so horrifically? Of course, I have no answer and none of us do. But I'm 42 now, not much younger than she was when she left, and I know there are still times I would trade every worldly possession and every friend I have just to be with her again and share stories and make each other laugh like we used to.

And, perhaps, if there is something on the other side (and I am suspect of those who ascertain too vehemently one way or another), maybe we'll get to again.

Today makes 35 years since she died and yesterday the entire family, spanning in ages from 76 to infancy, came together to celebrate her life. And I think somehow we made her happy.

I miss you, Yiayia.

Love always,
Litsa
Posted by Litsa Dremousis: at 11:37 AM

Dearest Litsa - Thank you for your touching and loving comments. Since you absoloutely meant the world to your YiaYia it is obvious that the feeling was (is) mutual. I am glad that you are able to put into words what we all feel. May her memory be eternal (and thanks to you and her other beloved grandchildren) I am sure it will. Love, Thia Peggy

Thank you, Thia! Your insight and feedback mean so much. I really appreciate both. And you, of course. :)

Thanks so much, Kristnen! And I hope everything is well in your world, sweets.

I needed this more than ever this week; yai-yai's work, perhaps? So many commonalities, of course, and very inspiring as she and your family will continue to be.

Glad it resonated for you, Anthes. It sounds like you had a wonderful yiayia, as well. Thank you, as always, for your eloquence and wit.

This is so beautiful and moving. I know I would have loved your Yiayia as much as I love the rest of your family. I'm glad you got to spend at least a little time with her.