Six questions for Ralph Nader, who is reading at Powell's Books in Portland tomorrow, October 4: 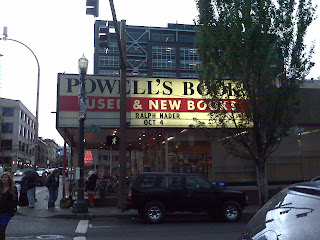 1) At one point, you were the country's leading consumer advocate and, unquestionably, were responsible for saving hundreds of thousands of lives. What the hell happened?

2) Do you ever pause and consider the stunning level of your jack-assery when you purported during your 2000 campaign for president that there was absolutely no difference between the Democrats and Republicans? Of course, all sentient adults know both parties are rife with corruption and venality, but in light of George W. Bush's eight year Reign of Mistakes, are you willing to cede that perhaps Al Gore possessed far greater intellect, empathy, and competence and might not have steered the country into a shit-laden ditch?

3) A number of your friends spoke publicly after the 2000 election that they supported you because you assured them your run was essentially symbolic and that you were shining a spotlight on pertinent issues that might otherwise get overlooked, but that if the polls indicated a dead heat between Gore and Bush, you would gracefully bow out. Of course, you did not, and the same friends claimed to be disillusioned by your festering demagoguery. Receive a lot of birthday cards anymore, sir?

4) Who has the bigger persecution complex: you or Sarah Palin? Have you considered battling for the title via a dart game or arm wrestling?

5) Still with the rumpled suit? Really?

6) Will you go away ever? What if we all chip in for candy or a nice pot roast?
Posted by Litsa Dremousis: at 11:17 AM